Having been brought up in Coral Gables, FL, my first exposure to old master paintings for which I began to develop an inclination in my teens, not surprisingly came by my first visits to the Lowe Art Museum in Coral Gables which is located on the Campus of the University of Miami. I studied art history there as well.  Fortunately for me - and the S FL community - The Lowe was one of the many regional repositories of specially chosen by the Samuel Kress Foundation to receive the gift of an assembled collection of old master paintings. The Kress legacy to the Lowe is a cornucopia of fine paintings and a few sculptures from Italy, the German speaking world as well as Flanders. As any visitor to Miami knows, the so called wide and diverse "art scene" is emphatically more concerned and focused on 20th Century and Contemporary Art. If that's your inclination, there are Museums like PAMM which recently opened to great fanfare. But if you are from the dwindling ranks of the more soft spoken, well read, admittedly somewhat bookish and historically inclined category of art lover who enjoys the way an old master painting can suddenly lure you briefly - but intensely - into a lost world of self satisfied but jovial Dutch merchants who delight in being immortalized on canvas surrounded by the luxuries money and success bring, Flemish ladies and gentleman of fine comportment in the middle of a stately courtship, Italian revelers playing out a scene from the Old Testament, or French royalty promenading in the gardens of a fine chateau in the company of their seemingly endless attendants, the Kress Collection at the Lowe Art Museum is for YOU!

The collection was donated in the 1950's when the Museum was then just known as the Joe and Emily Lowe Gallery. The museum has since had this distinguished collection of Continental European paintings displayed in two adjoining galleries separated by a passage that is punctuated by a carved stone Italian arch overhead carved in Florence in about 1500 by a Tirolese master in the manner of Michael Pacher. It has upper corner medailions depicting the Virgin Mary and the Christ Child. 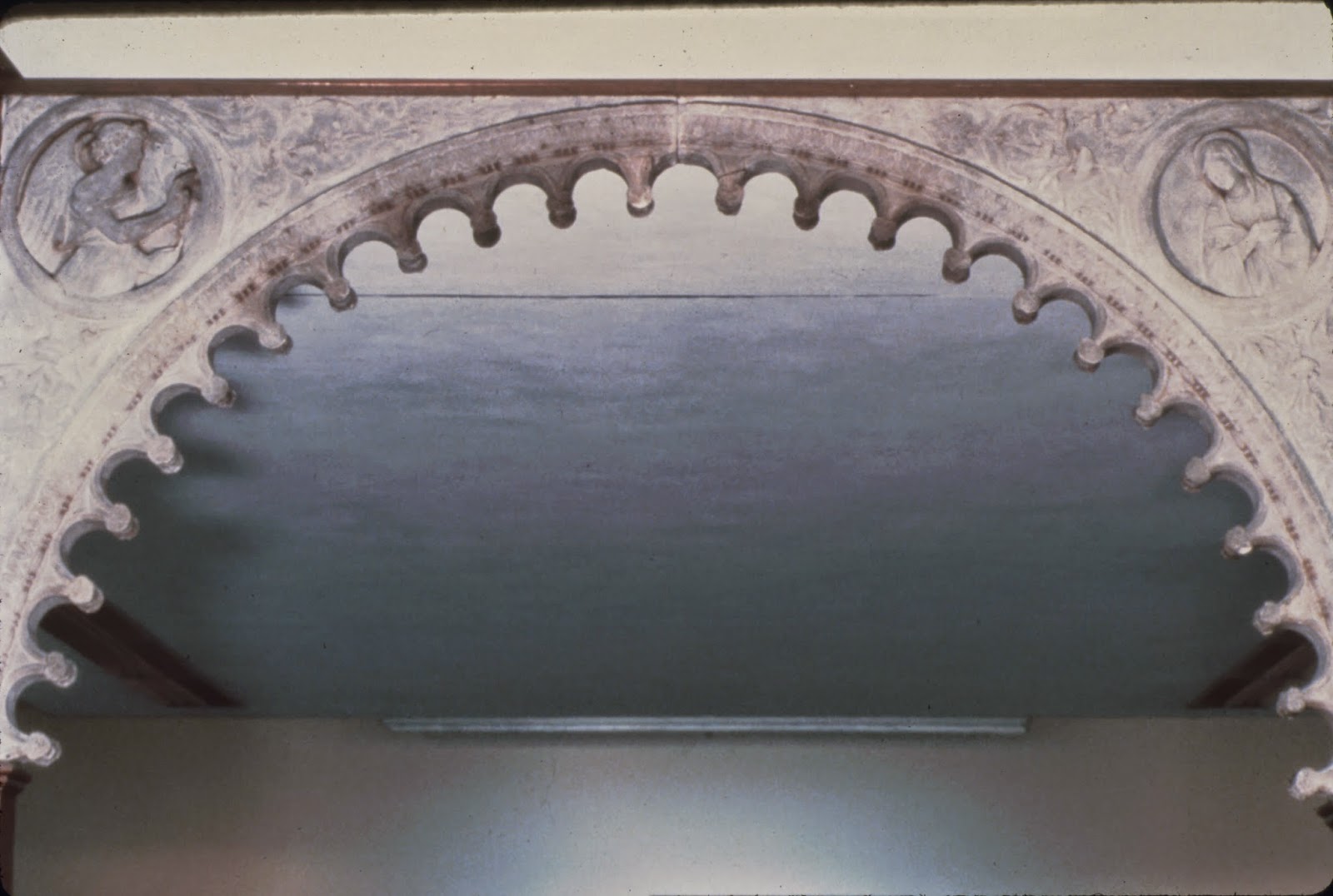 The chronological beginnings of the collection start with late Medieval - Early Renaissance works of art by contemporaries of Cimabue and Giotto - more accurately - artists who were more likely slightly younger than these giants who began to employ the prior masters' contributions of space, emotion, and volume with regard to the figure in art. Since the legacy was given to the Lowe over 60 years ago, museum curatorial staff and other independent scholars have updated much of the information with more recent research and findings.  Most notable among the independent scholars is the very capable Professor Perri Lee Roberts, Ph. D.,  who is also a University of Miami professor of art history, an adjunct Lowe Museum curator, an occasional guest curator for Museum exhibitions at various other institutions, who justly ranks as a world respected authority on Early Renaissance Italian painting, and is author of  a scholarly monograph on Masolino di Panicale (Oxford University Press, 1993). Professor Roberts has been a valued colleague, friend and mentor who I frequently consult with confidence and with whom working on any project is always rewarding and just plain fun!  Professor Roberts has made significant updates in terms of attribution to various paintings in the Kress Gallery which can be read in the Museum's standard guide book from which I was able to note the dates, attributions and general background information on the art herein being shared.  At the same time, the old original Kress Collection catalog remains a valid reference for this collection well worth consulting in spite of that fact that some of the scholarship of Kress Foundation experts who put it together is partially dated.  This is not in any way unusual. Art historians are always investigating and finding new information as a result of which attributions to artists are changed and elusive subjects in allegorical paintings become more clear. Often research on portraits reveal an entirely different identity of the subject.

I hope to return another time to discuss more of the works in this fine small regional museum collection in the coming months and years in more detail in and in which I intend to focus on a single work or art of a small group of works sharing a common thread. However, this inagural blog essay is an introductory selection of some of the paintings in the Lowe's Kress Galleries that have captured my fancy for their quality of execution, historical importance or simply their charm.

Among the earlier works offered in this collection which has a majority of Italian painting are two paintings of note that represent the early appearance of the human figure that seem to depart from Medieval styles by the depiction of figures that increasingly seem to occupy a pictorial illusion of 3 dimensional space.  This increasing tendency in Italian painting was seen as early in the work of artists like Cimabue and especially later Giotto who also added a notable amount of emotion in his more weighty solid figures.  This three part and very rare altarpiece by Lippo Vanni who was active in Italy from 1341 to 1375 was a royal commission from Queen Elizabeth of Hungary who is discernible in the right of the central main panel as a donor. The painting is tempera and gold leaf on wood, as was often the case. 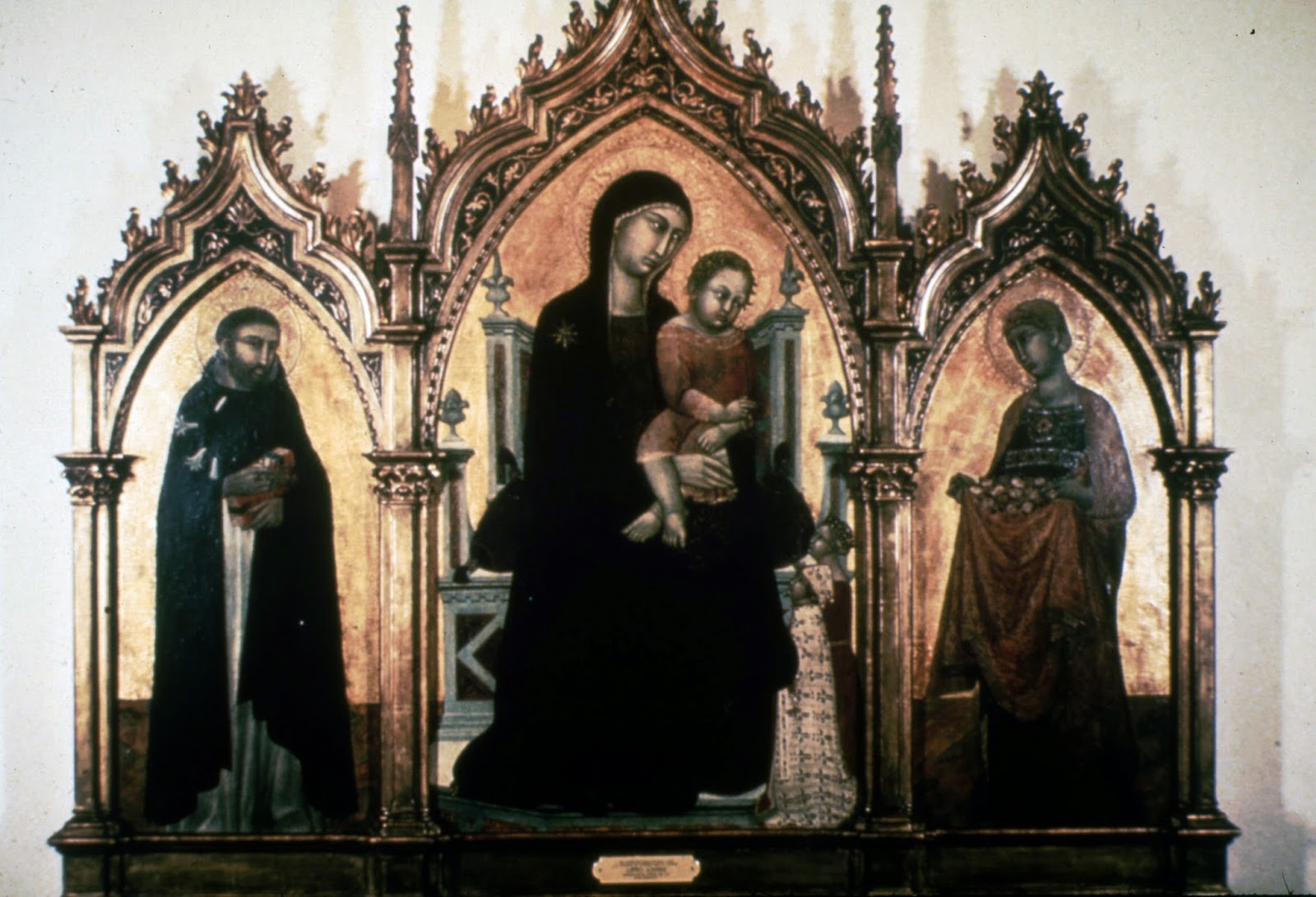 About the same time in Tuscany, and notable for its undeniably more 3 dimensional aspect that indicates the irrefutable influence of Giotto is this engaging small tempera on wood panel depicting The Crucifixion by an unknown Tuscan painter who painted it during the 2nd quarter of the 14th Century. A small intimate scaled work to be sure... But it's no less visually powerful as the larger scale altarpiece 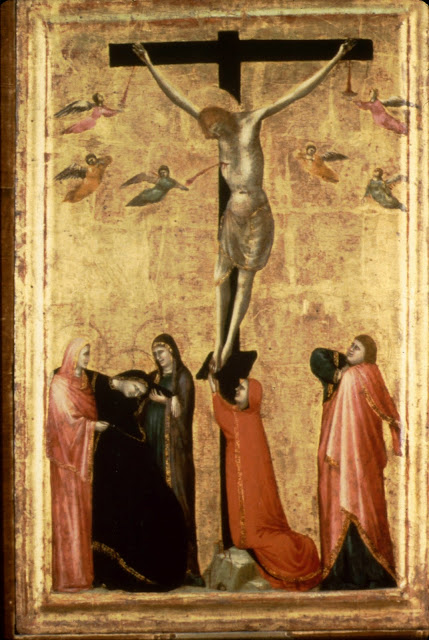 The 15th Century brings more prosperity and interest in Humanism that bursts like a dam in the 16th Century. Consequently, there is an increasing market for secular portraiture in which the figure is progressively treated more spatially. At the same time, artists of the time sought to portray their subjects and clients with a greater measure of psychological insight.   The Kress galleries have a great array of portraits spanning the early Renaissance to the more mature Mannerist period.  One of the best is this Portrait of Bartolomeo Cepolla attributed to Jacomo Veneziano who was active from about 1472 until 1497. The subject was an eminent jurist. He's clearly nobody's fool either! 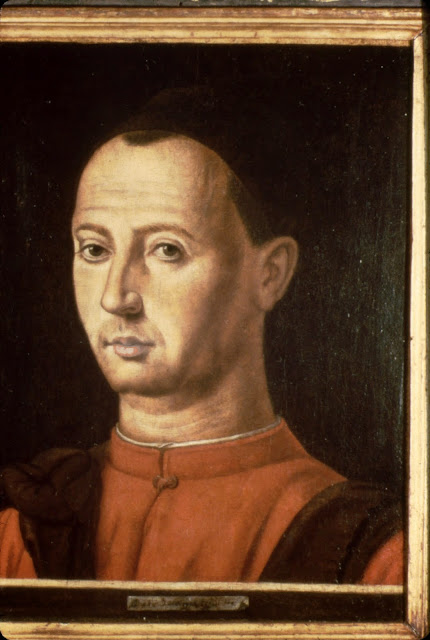 Other portraits from Renaissance and Mannerist Italy include this affable oil on panel portrait of a gentleman formerly attributed by the Kress Foundation to Giovanni Bellini. Though in past recent years that attribution was cautiously set aside. Attributions to whatever artist notwithstanding, it is a very successfully representative  Venetian portrait from the early 16th Century and a portrait I have always found to be infused with quiet serenity and poetry. This sitter clearly knows his place in the world. 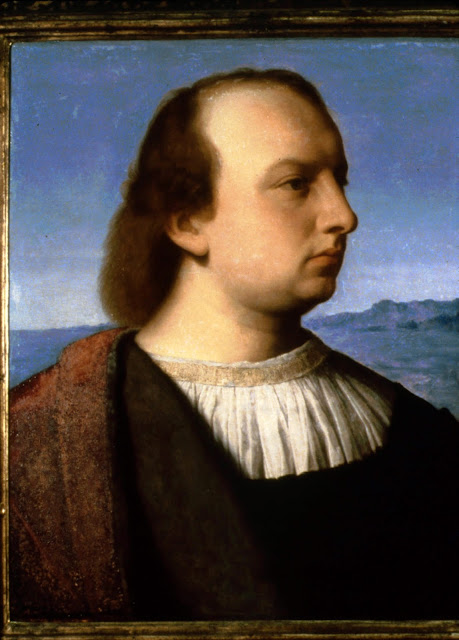 Another oil on panel portrait that has always engaged my attention has been this enigmatic portrait of a lady painted most likely in Parma by an artist who was clearly influenced by Correggio... Can't miss that sfumato! The chiaroscuro is quite in place too! 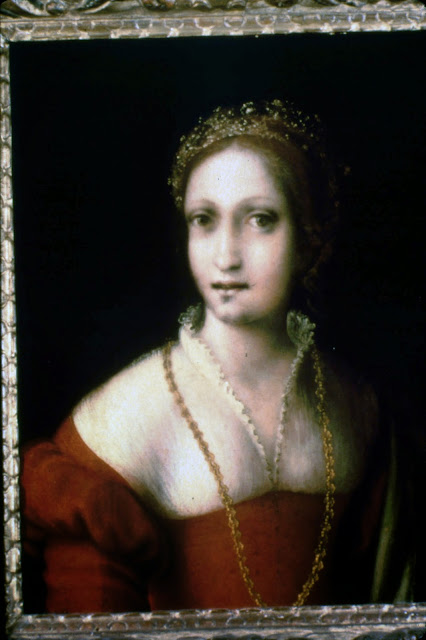 And talk about a singular distinction... When I was a young child, I remember vividly that this large festive and curious tondo painting on wood measuring 48.50 inches diameter by Bernardino Fungai was on the cover of a National Geographic issue in which the main feature cover story was a report on the Kress Foundation and its collections. What a whimsical gathering it is! No wonder art historians hammer out a new thesis about this painting generation after generation.  Here we see a Christ child being fondly touched by Mary- Ecclesia symbolizing the marriage of Christ to the Church. A Mary Magdalene covered in her blonde locks of hair looks on while the angels steady the Christ child they are holding aloft. The eccentricities don't stop there and continue in the background which includes chatty witnesses and an implausibly challenging landscape in which I would not care remotely to live. 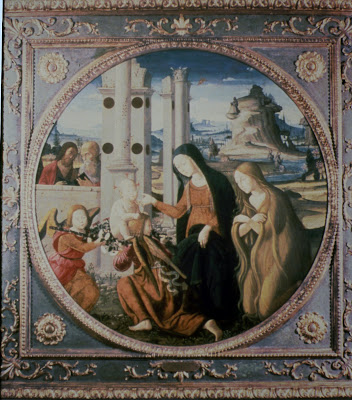 Other amusing and engaging later Renaissance paintings from Italy include this wistful allegory depicting a young man who is confronting the inevitable choice foisted upon the young of pursuing a life pleasure seeking (represented by the blonde who is very disheveled and possibly a prostitute) or pursuing a life of study and serious purpose. Wouldn't the viewers of this charming Venetian school oil painting on canvas painted in the 1st quarter of the 16th Century like to know which path he eventually chose? 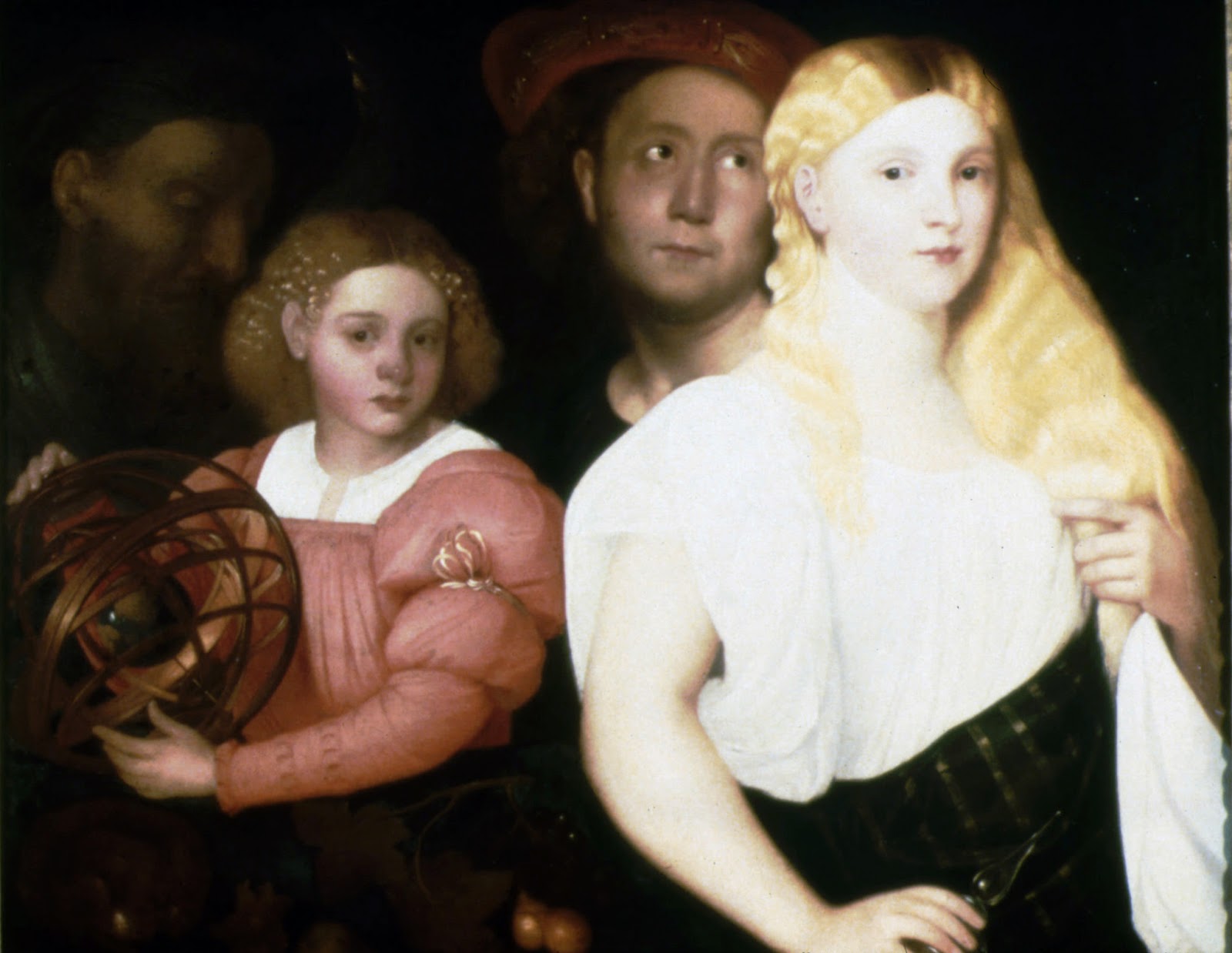 No less mysterious is this tempera on wood painting depicting a what Professor Roberts has listed in the Lowe guide book as "The Ship of Love" and which she attributes to an anonymous master active in Northern Italy in the late 15th Century. The stylized waves echoed by the billowing flags , the stubby little Cupid, the younger lady dreaming of love resting her head on the lap of the more sage older upright seated lady holding the cup of constancy and fidelity, the small statue of fortune atop the canopy over the seated lady under whose protection this sea voyage is being undertaken, the inscription on the canopy from Ovid basically stating that love is won with gold, all add to the mystery, provide clues, but in the end, leave the viewer with no clear answer. 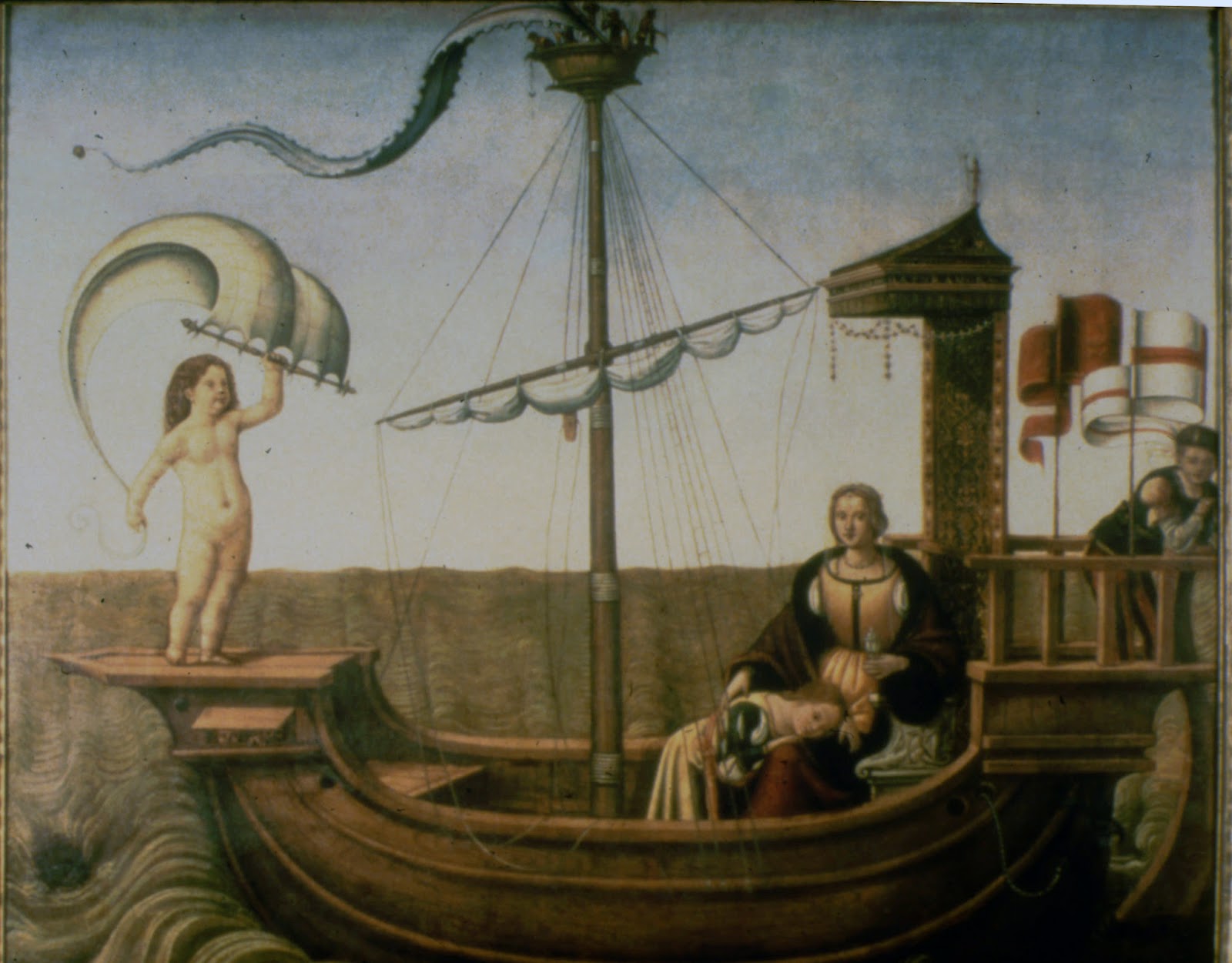 However the Kress is not just Italian paintings. The Northern Renaissance is also represented - and represented admirably!

Below is a truly glowing masterpiece of a donor portrait in a 2-panel devotional piece of oil on wood panel. The artist is Adriaen Isenbrandt who was active in Flanders from about 1510 to 1551. This devotional piece dates from 1513.   Professor Roberts had identified the subject as a member of the Hillensberger Family of Hanover thanks to the family arms appearing on the verso of the right hand wing. The colours pulsate, the detail is relentless - especially in the back ground.  A tour de force! 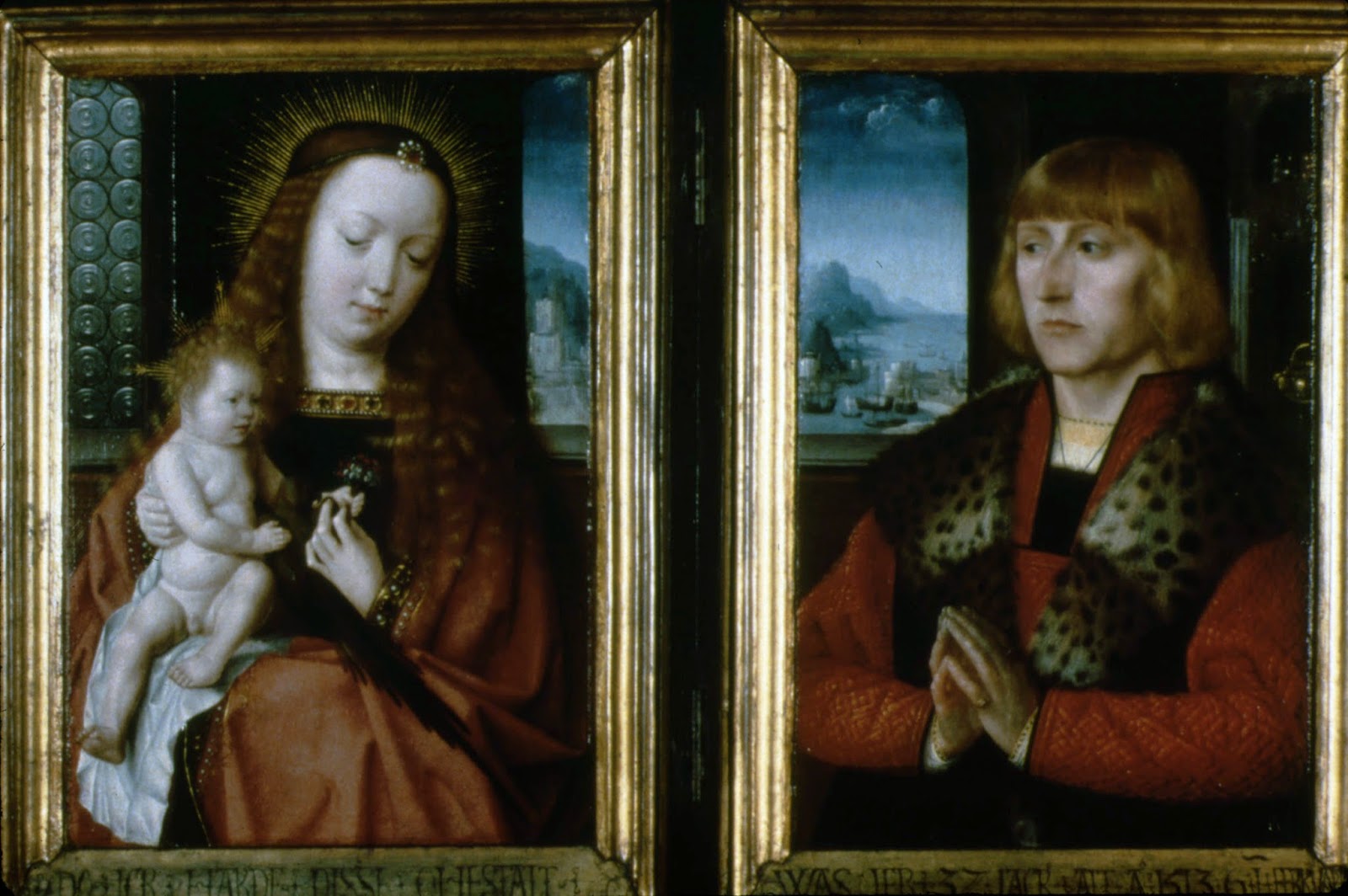 The collection is rounded out by a breathtaking depiction of the Judgment of Paris by the hand of the noted Flemish master and contemporary of Rubens - Jacob Jordaens (1593 to 1678). I do not hesitate a moment to declare this is probably the finest painting in the The Lowe's Kress Collection or the museum's itself.  I plan to discuss this painting as the subject of a future essay in more detail later. It is sumptuous! 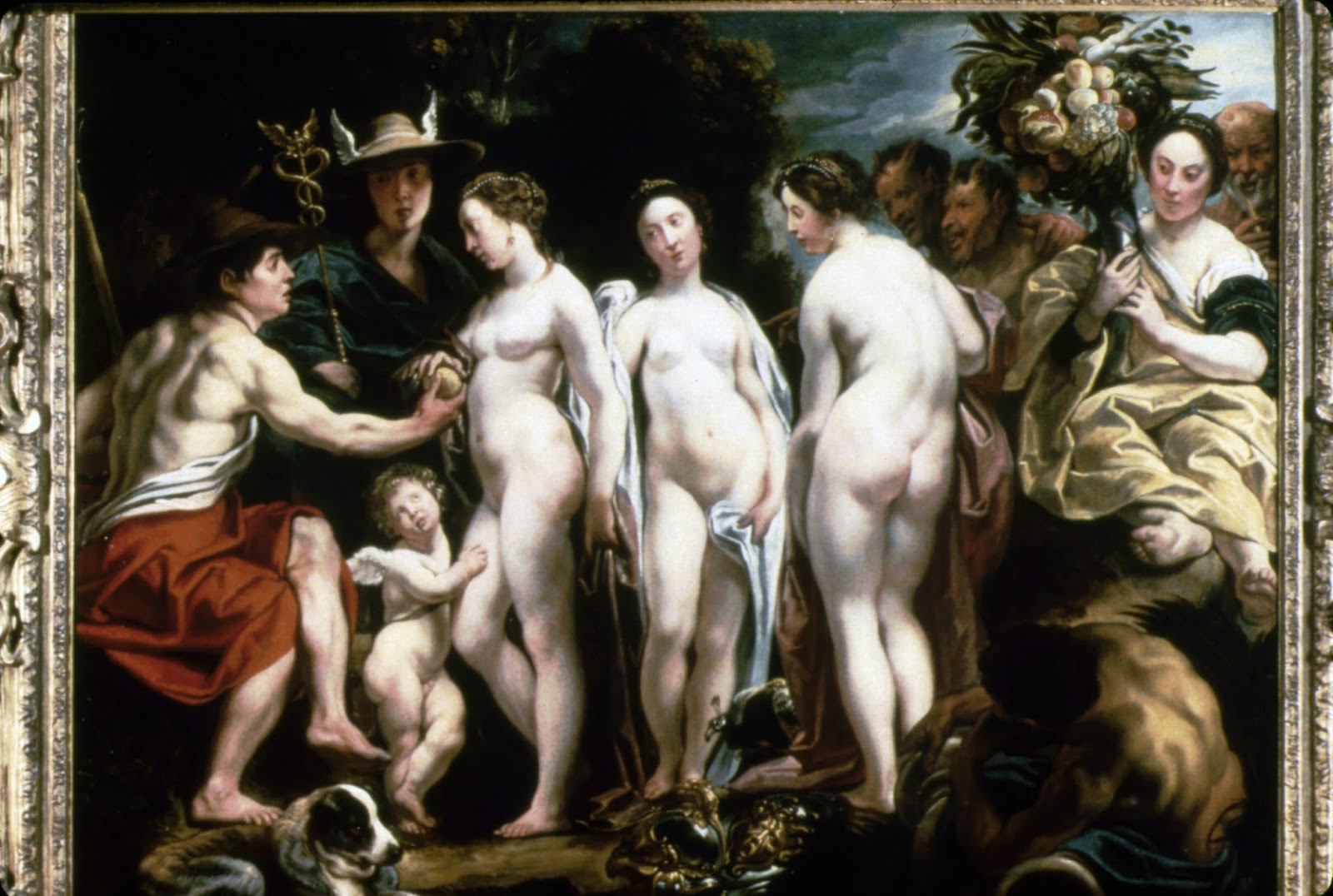 Returning to the Italian School as we wind down this bird's eye cursory visit to these lovely rooms, I can't bring our visit to an end without sharing an endearing pair of canvases by Leonardo Coccorante that have always amused me and that embody much of the artistic milieu of 18th Century Naples at a time that city was under Bourbon rule enjoying a true golden age in the arts. Coccorante's pair of pendant paintings depicting the port of Ostia in calm and then again in a storm are pure theatre! 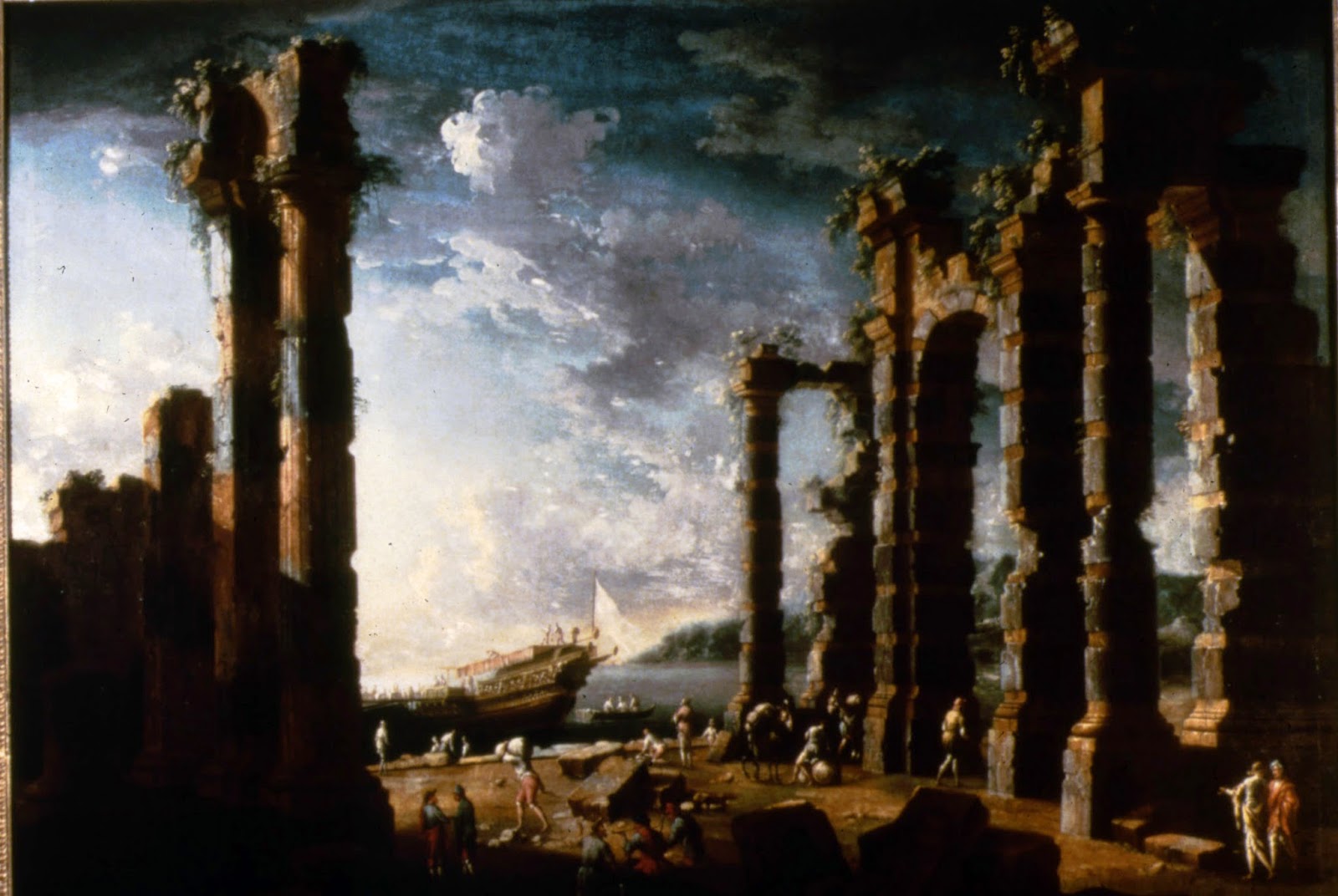 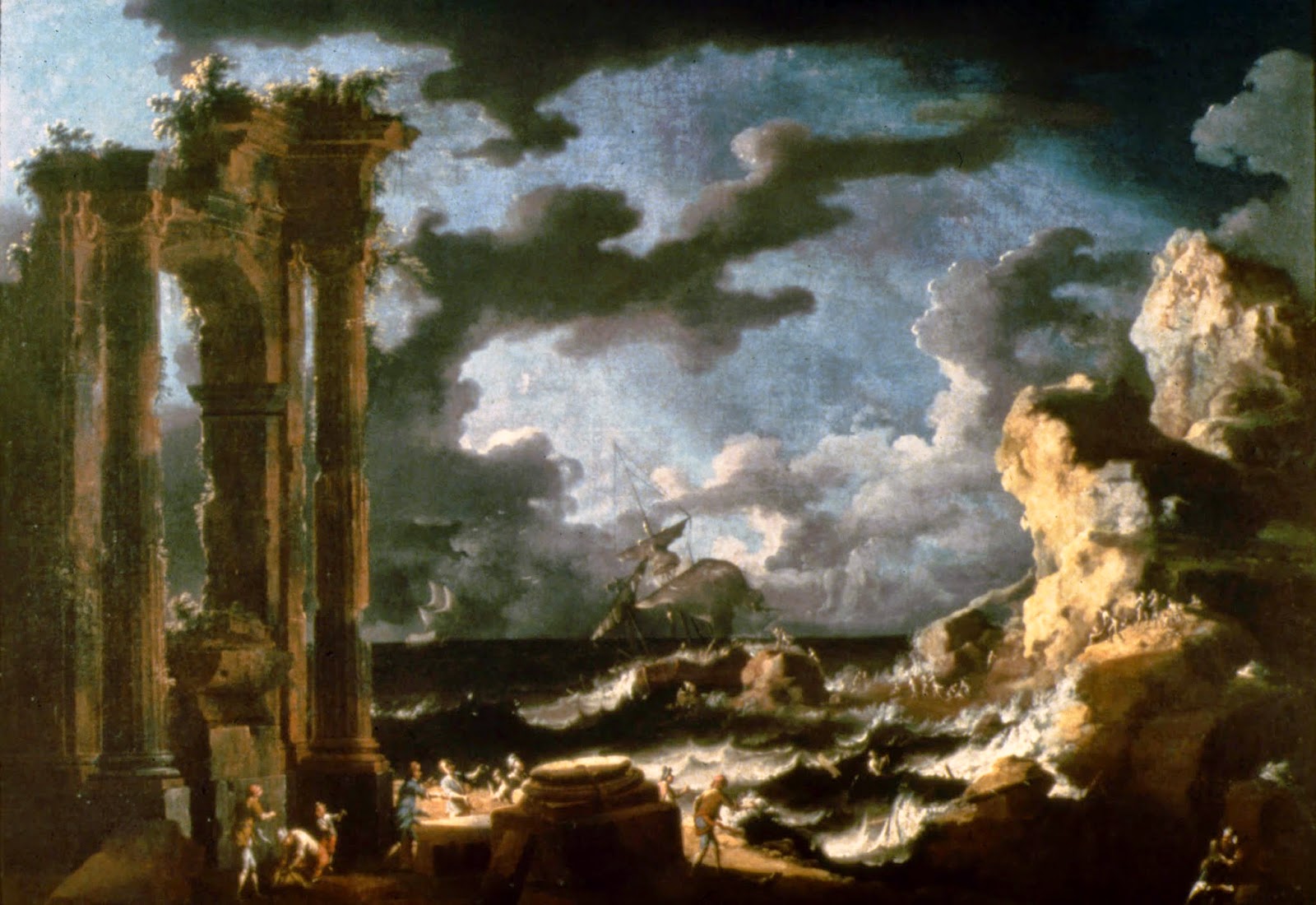 What an enticing note on which to wind up our visit to the Lowe Art Museum's Kress Galleries!

If you're ever in Miami, it's worth the visit. If you come for Art Basel and want a respite from the endless pretentious parties and overload on Contemporary art, it's worth the drive to Coral Gables from Miami Beach just to see these lovely works of earlier masters which are well displayed in galleries that are seldom crowded. The Lowe Museum is located at 1301 Stanford Drive on the campus of the University of Miami in Coral Gables, FL 33146. The telephone is 305. 284. 3535. The museum is closed on Mondays.

Posted by The Curious Connoisseur at 10:00 PM No comments: